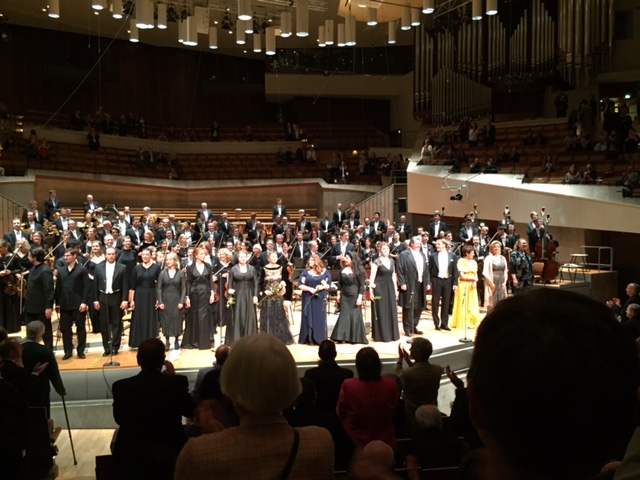 "Both female voices were round and full of warmth: Abbie Furmansky's soprano shined voluminously, while she was also able to touch the listener with softness and beautiful simplicity. Incredibly moving was her interpretation of the famous 'Libera me' until the dying end of the piece."
Potsdamer Neueste Nachrichten 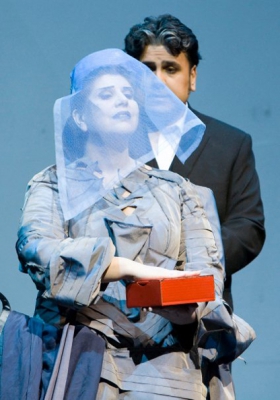 "Abbie Furmansky in the title role; with a powerful and comfortably warm, radiant voice."
Darmstädter Echo

"Abbie Furmansky masters the murderdous part of Butterfly, with her all at once, tantalizingly heartfelt, dramatic soprano, effortlessly."
Mainz Echo

"The American Abbie Furmansky is convincing in the title role, with a luminous, in both high and low, well- balanced soprano."
Evangelische.de

"Above all, Abbie Furmansky with a cultivated Butterfly that is impressive vocally."
Neues Deutschland

As Marschallin in Der Rosenkavalier

"Abbie Furmansky gives her debut in Mainz as the Marschallin with a lusciously glistening high-quality soprano voice."
Opernwelt

"Abbie Furmansky creates a Marschallin who, with her luminous soprano, transitions herself away from her own dark thoughts... "
Echo Online

"Soprano Abbie Furmansky introduces herself expressively and astonishingly relaxed in the role of the Marschallin."
Frankfurter Neue Presse

"The life of the Marschallin is perfectly cast with soprano Abbie Furmansky."
Offenbach Post

"Vocal nobility and great lyrical substance shaped Abbie Furmansky's portrait of the Marschallin. Her sophisticated artistic bearing makes the gorgeousness of Strauss' sound come out perfectly. Furmansky's youthful vivid Marschallin is miles away from the boring cliché of the resigned primadonna."
Hanauer Anzeiger

"The young, wonderful soprano Abbie Furmansky's voice is expressively shining, also in the lower range. She is an absolute win for the ensemble.
Orpheus

"Newly engaged American Abbie Furmansky fulfills all expectations for the Marschallin. She appears elegant, with a loving contenance towards Mohammed, and in the end she sacrifices with dignity.
Her monologue about age comes across believable and touching.. She lets her gorgeous soprano voice blossom in the lyrical parts and she attacks expressively, especially in the ensemble parts."
Der Neue Merkur 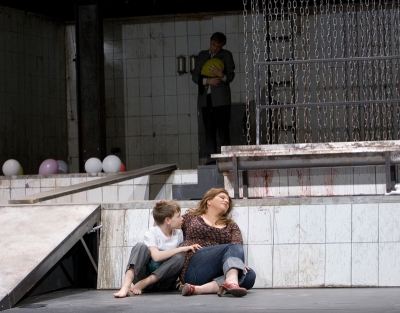 As Marie in Wozzeck

"...Abbie Furmansky...was convincing in the more lyrical sequences singing very subtle piano phrases and her vocal power suited the role very well. In this production Marie is definitely a woman who knows what she wants: escaping the poor life with Wozzeck. According to that she expects more than just a quick 'one night stand' from the affair with the Tambourmajor."
Das Opernglas

"Abbie Furmansky showed the gradual transition of the fun-loving and vivid Marie to an eventual victim: her pleading arioso, that refers to the biblical story of Mary Magdalena was especially touching."
Hanauer Anzeiger

"...brilliantly cast with versatile actor-singers, such as Marie- with the American Abbie Furmansky - a multifaceted portrait, moving between a vulgar tart and loving mother, with a strong sounding soprano."
SWR2 Journal am Mittag

"Abbie Furmansky convinced in the role of Marie. Torn between her half realised hopelessness, and the last spark of her illusion of a better life, she portrayed a young broken person in an authentic way."
Frankfurter Neue Presse

"The singing was highly laudable...and Abbie Furmansky (Marie) had a good feel for the expressive music of Alban Berg, so rich with hidden messages."
Mannheimer Morgen

As Mimì in La Bohème

"Of all the current Bohème-productions in the region, Mainz offers the best Mimi with Abbie Furmansky. A rich, warm voice with huge reserves, and subtile characterization, guaranteed to give you goose bumps."
Mainzer Rhein Zeitung

"Abbie Furmansky (Mimi) sang with a full voice and was convincing in all respects."
Opera point

As Jenny in Mahagonny

"In the role of the whore Jenny Hill Abbie Furmansky enriches the warm sound of her soprano voice with an appropriate vulgarity."
Mainzer Rhein Zeitung, Jenny

"Abbie Furmansky impresses with the role of Jenny with her undisguised joy of play acting."
Frankfurter Neue Presse, Jenny

"American Soprano Abbie Furmansky was the vocal highlight. After long lasting applause there even was an encore. Her dark colored timbre responded to Donna Anna's discrepancy between love and determination. In the allegretto moderato the American sang brilliant coloratura. In the high notes she vocalised with crystal clear intonation. "
Thurgauer Zeitung

"Her sound was so round and colorful."
Orpheus Opernspiegel

"Abbie Furmansky astonished with her voluminous, carrying and indefatigable soprano voice. She added remarkable temperament to create the many colors of the varied moods displayed in the recital.
In spite of dramatic singing her voice always stayed in the same contour."
Orpheus Opernspiegel- Liederabend an der Deutschen Oper

"As Musetta, for example, Abbie Furmansky avoided crossing the line between flamboyance and absurdity at the Café Momus. The restraint made Musetta's more serious side, in the last act, more plausible... Ms Furmansky's lively account of the Waltz Song was one of the highlights of the performance."
The New York Times - La Boheme

"Soprano Abbie Furmansky sang Musetta with ease and style. She carried over the orchestra and ensemble without any sense of strain or athleticism in the second act. Her Musetta was both fiery and feminine."
New York Newsday - La Boheme

"Her voice is crystalline yet rich, distinctive and characterful."
Classical Vocal Singer

We use cookies on our website. Some of them are essential for the operation of the site, while others help us to improve this site and the user experience (tracking cookies). You can decide for yourself whether you want to allow cookies or not. Please note that if you reject them, you may not be able to use all the functionalities of the site.